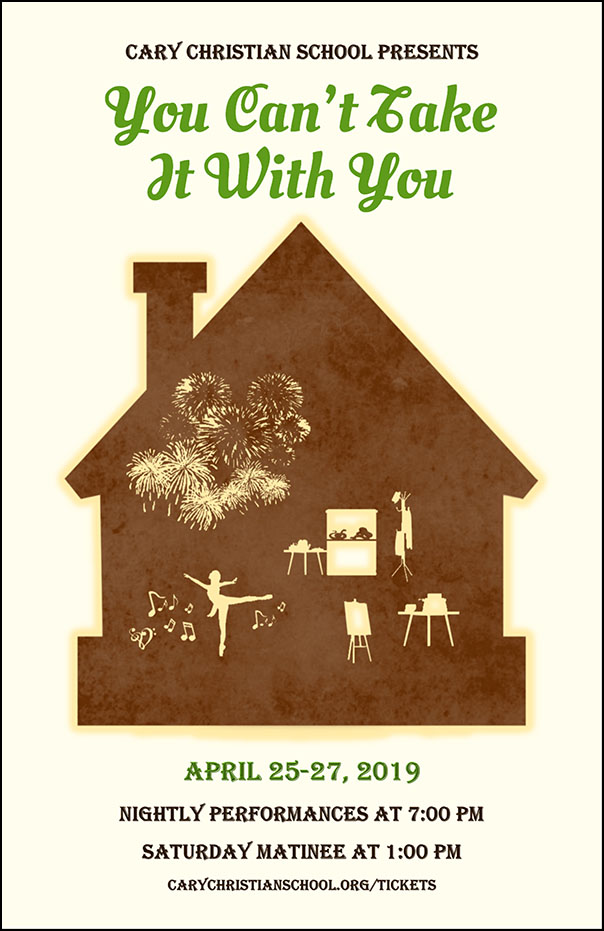 “You Can’t Take It With You”

Our Rhetoric School Drama Department is thrilled to present You Can’t Take It With You by the iconic writing team of George Kaufman and Moss Hart. This Pulitzer-Prize-winning comedy, based on the premise of 1 Timothy 6:7, “For we brought nothing into this world, and it is certain we can carry nothing out,” opened at the Booth Theatre in New York City on December 14, 1936. America was still reeling from the Great Depression, and the world was teetering on the brink of World War II. Audiences were eager to escape the difficulties of daily life and forget the bad news from both home and abroad, and this absurd, yet relatable and endearing, theatrical experience was just what the doctor ordered.

The next day, in his column for the New York Evening Post, distinguished critic John Mason Brown, reported:

In a world in which the sanity usually associate d with sunshine is sadly overvalued, You Can’t Take It with You is something to be prized. It is moonstruck, almost from beginning to end. It is blessed with all the happiest lunacies Moss Hart and George S. Kaufman have been able to contribute to it. The Sycamore family is the most gloriously mad group of contented eccentrics the modern theatre has yet had the good fortune to shadow.

The original show ran for 837 consecutive performances. This zany and beloved play has consistently been produced ever since, by high schools, colleges, community theater, professional theater, and Broadway revival. The 1938 Frank Capra film adaptation, starring Jimmy Stewart, Jean Arthur, and Lionel Barrymore, was also a huge success, winning the Best Picture Oscar. Shows like this and writers like Kaufman and Hart set the standard for the sitcoms and romcoms with which we are so familiar today.

The affirmation of individuality lies at the heart of this play. Most comedies offer happiness in one form or another; this play actively celebrates joy. – Aden Ross, Utah Shakespeare Festival

The themes of this production are wildly varied and yet utterly intentional and connected. Individuality, politics, creativity, food, snakes, “love dreams,” music, dance, fireworks are all crucial elements of the world of the Sycamore family. This production asks the question, “In what ways can our current cultural institution of work and emphasis on financial success become a conscious denial of individuality and perhaps even God’s calling on our lives?” Conversely, “To what extent is the pursuit of individual interest and personal happiness irresponsible?” Is it possible to strike a balance, and what would that look like?

Plan to join us for an evening performance on April 25-27 at 7PM or for the Saturday Matinee on April 27 at 1PM in the auditorium. Tickets are required and may be purchased online here.