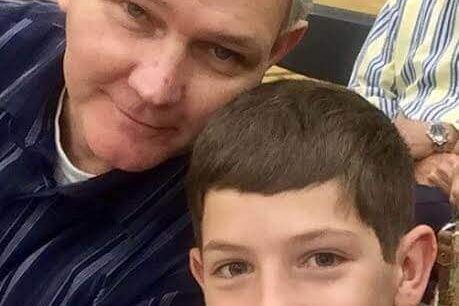 As part of our history unit on immigration, fourth graders learn about what brought people to America and the rich heritage of our country.  This unit integrates history with reading, writing, research, family traditions, and a biblical worldview. We see how God in his sovereignty has delivered families through trials and circumstances to bring them to where they are today. For many families, this includes spiritual growth or a conversion to faith.

At our Grandparents’ Day program, the students introduce their grandparents to their classmates and pay tribute to them by reading their biographies aloud. We delight in having the older generations on campus, and invite them to share stories, artifacts, memories, and scripture. We’ve even had grandparents teach the classes about something in their area of expertise. To God be the glory for the talents and abilities He has given these students as evidenced in their well done work.

My grandpa’s name is Frank Brady. He was born in New York on May 22, 1959. There were six kids in his family. He had two older sisters and three younger brothers. His ancestors emigrated from Ireland. He lived in Bellerose, New York. He enjoyed playing touch football, slap (which is like baseball), riding bikes, and swimming. During summer, his family went on a two or three week camping trip.  His mom was a nurse and his dad was a New York City police officer. He played football and lacrosse in high school. They won the state championship. His dad taught him and his brother to do plumbing, carpentry, and auto repairs. He and his brothers opened up a shop.

His parents made a good income. The repair shop they made helped the family. They did not go to restaurants a lot. He got a part time job at a gas station. During the gas shortage, he remembers having to wait in long lines to get gas. That must have been hard.

My grandpa served in the Marines. He was in Lebanon, the Persian Gulf, Desert Shield, Desert Storm, and Kuwait. During September 11th, he saw the destruction up close. He grew up during the Cold War and the Vietnam War. His office was moved from the bombing site about a week before.

My grandpa was deployed to Desert Shield. Before they went to war, he thought that if the war did not go to plan that he should do something religious.  He started sitting in Bible studies at camp. One day he asked the leader, “What is this?” The guy told him to read the book of John. He learned about the Holy Spirit, which he did not know about. The Holy Spirit opened his eyes. He ended up asking Jesus into his heart. He went home and told my mom and grandma. They attended a church. My mom and grandma soon accepted Jesus, which led to me accepting him.

This is some advice from my grandpa. Be kind and humble. Seek God for help. Find a goal and focus everything on it. Make a difference in the world. And to sum it all up, Proverbs 3:5, “Trust in the Lord with all your heart and lean not on your own understanding.” I am thankful for my grandpa!