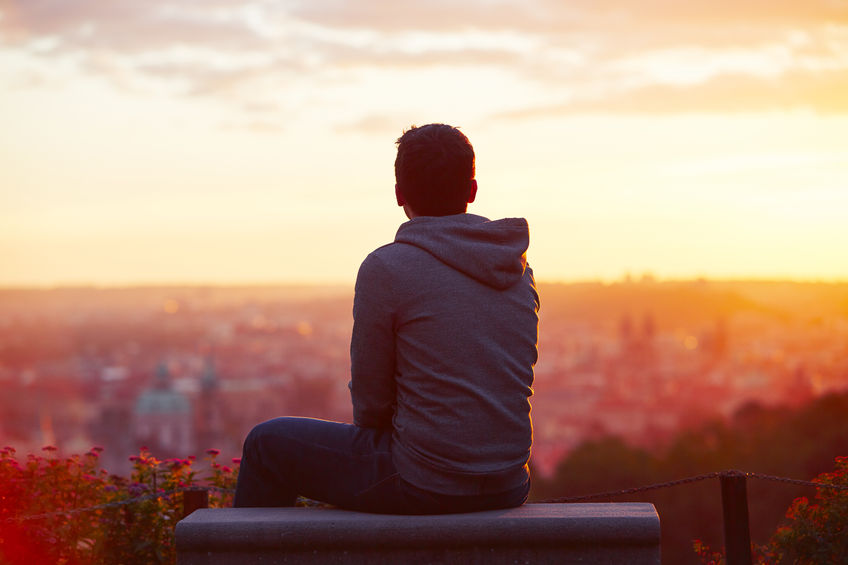 I enjoy having my students answer and write about very open-ended questions: What is virtue? What is a role-model? How can we engage in dialogue with those with whom we vehemently disagree? These can be deeply philosophical questions, but also ones with practical ramifications. The 9th grade engaged in one of these questions recently: Who am I?

This question is certainly one they have dealt with before. It determines the kind of clothes they wear, the music they listen to, and the friends they make. While they may be dealing with this question every day on an implicit level, I find that few young people today have dealt with this question explicitly in an environment that encouraged deep self-reflection on their own successes and failures, vices and virtues, strengths and weaknesses. As a result of this abdication of one of life’s most crucial questions, young people are adrift. Who am I? Often, for these young people the answer is “I don’t know,” which often leads to the nihilistic “I can’t know.” If you do not know yourself, how can you expect to be known by others? How can you expect to find meaning, purpose, and joy in your life? That’s why in Rhetoric class, we ask that momentous question: Who am I?

How Has Technology Helped (or Hindered) Our Ability to Answer?

1. The Promise of Omniscience

The amount of information available on the internet is essentially unlimited. We can access lectures on anything from economics to mechanics, articles on political philosophy to sports science. What is the implicit promise? You can know anything; which might quickly morph into You can know everything. One of the major promises of the smartphone age is omniscience. If our access to information is unlimited, the only limitation we have is the time we have to spend on it.

How has the internet delivered on this promise? Not only have we failed to become omniscient, we have become less intelligent. Greater engagement with the internet has been well documented to decrease memory, critical thinking skills, and creativity. This is most exemplary in what is known as “cognitive offloading.” Cognitive offloading means that when we can constantly have any information accessible in three taps of our thumbs and never further away than our pocket, our need to retain information in our brains is greatly lessened. Therefore, we naturally remember less. We can “offload” the information from our brains because we know that it will be stored in our phones. The consequence for students is that they have a more difficult time learning subjects and remembering to do tasks. They have trouble taking tests and thinking about abstract issues with clarity, because the information required to do so doesn’t remain in their brains. In fact, if they are going to engage in learning, their only option, it seems, is to engage more heavily in internet browsing. A vicious cycle is created.

2. The Promise of Omnipotence

Another promise that technology has made is one of ability. When Apple first launched the App Store back in 2008, there was a popular saying you might remember: “There’s an app for that!” Got to make sure you wake up on time? The iPhone’s got your back! Got to find a gluten-free, vegan brownie mix with kale hidden in it (I hope not)? No problem, there’s an app for that! This is the promise of omnipotence. With this device, you can do anything. Again, it’s not much of a leap to go from “anything” to “everything.”

In certain ways, this promise has been realized. I don’t have to erase words on a page or cross out sentences while I type this essay, which allows me to write more efficiently. I use apps on my own smartphone as a baby monitor, photo editor, Cubs World Series ticket purchaser (I wish), and more. But inevitably, these promises have also failed us. We have not only failed to become omnipotent, our productivity is decreasing as well. Lethargy is virtually synonymous with increased smartphone usage. Since our phones are constantly giving us notifications, we are constantly distracted when we use technology to complete tasks. While I was writing this article, I received notifications from Facebook, Twitter, Instagram, MLB, and a myriad of emails. The devices that have promised us that great productivity have also provided us with a level of distraction that is unparalleled in history. As a result, our attention spans are sharply decreasing and our cognitive ability is shrinking. As it turns out, if you want to be a strongly productive and efficient person, there’s really no app for that.

3. The Promise of Omnipresence

The last promise is the most heartbreaking. If you own a smartphone, you never have to be “away” from your friends. They can be constantly with you, and you with them. In essence, this is the promise of omnipresence and it can be boiled down into this statement: You never have to be alone. You can text, call, FaceTime, message, snap, direct message, tweet, comment, like, react, share, chat—am I missing any?—with anyone in the world, whenever you want. Say goodbye to loneliness! Unfortunately, the opposite has actually happened.

This is obvious if you go to a family restaurant. The family of four sitting around a table staring a screen is practically a cliché now. Not only have we failed to be with everyone at all times, we are now with no one all the time. We are isolated and far lonelier than we were without smartphones. And the social science research is startling: rates of anxiety, depression, and suicide are skyrocketing among teens. The people most heavily engaged in social media are the same people who are the most lonely, have the most trouble making new friends, feel the most isolated, take the most antidepressants, and are at the greatest risk of suicide. How have we responded as a culture? By making smartphone screens 30% larger!

How do these promises and their lack of fulfillment relate to my Rhetoric students answering the question that I placed before them?

The deeper, spiritual truth is that all of technology’s promises are eerily similar to a promise humanity has heard before. There is only one Being who is truly omniscient, omnipotent, and omnipresent. Could it be that all of these promises echo that first promise that turned out to be a lie? “You can be like God,” the serpent told Eve (Genesis 3:5). Is there a sense in which we walk around, sleep with, and work with a little device modeled after the first temptation and fall?

And yet, just as the serpent’s lie was not the end of the story, technology’s false promises need not be the end of the story either. We can resist the temptation to allow technology to define us and to rule over us. What we need most is to see ourselves as God sees us: glorious but drastically fallen creatures who He is in the process of redeeming. Only then can we see our technology as God sees it: a potentially wonderful tool for our benefit, but one which we must take control of, lest it take control of us first.

That, in part, is what makes Who am I? such a crucial question. It may seem too deep or too difficult to attempt to answer in our distracted and noisy lives, of overloaded inboxes and interminable social media notifications. We may be tempted to allow our technology to answer the question for us by letting it make us think we are either more or less than we really are.

But if we encourage each other to stop and turn off our smartphones, if we deliberately choose to create the mental space at home and at school that will allow us to reflect deeply upon our lives and our place in God’s universe, who knows what we might discover?

Who am I? Who are you? Who is your child?

Who’s ready to find out?