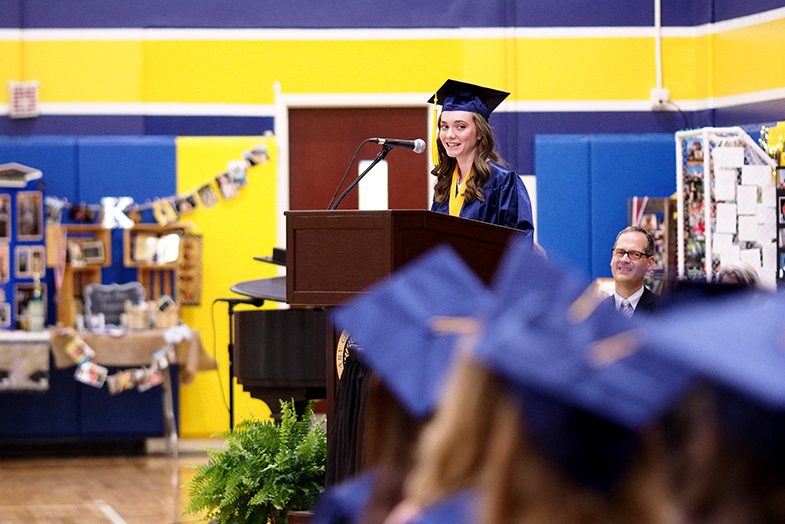 Cary Christian School’s class of 2018 graduated on May 17. This year our salutatorian was Marie Thompson and our valedictorian was Christy Dickman. One of the highlights of every CCS graduation is the privilege of hearing the wise and eloquent words delivered by our valedictorian and salutatorian, and this year was no exception.

Thank you for being here tonight. I’m truly honored to have the chance to speak to you all as Valedictorian.

There’s a little saying that’s been floating around Cary Christian for a while, and you may have heard it. It goes, “You can take the kid out of the CCS, but you can’t take the CCS out of the kid.” I think I speak for some of the graduates when I say, that’s probably pretty accurate. If you know me, you know I’ve definitely been pretty immersed in the CCS way of life, particularly as I’ve lived out the stages of the classical model.

On my tours as a student ambassador over the past few years, I have not only become well-versed in explaining the classical model of education, I’ve also gotten a few trips down memory lane. I got to walk down each of the four hallways of CCS and see the various assignments proudly lining the walls.

In the Phonics hallway, there are a lot of handwriting sheets, some of them more legible than others. Many of us graduates were together in Phonics school and probably remember those handwriting sheets. We could hardly write. Our fingers were uncooperative, and the shapes of letters were unfamiliar. Still, we were wide-eyed, and though people like me needed extra take-home handwriting practice sheets, we were Book 1 Harry Potters, or Lucy Pevensies just discovering the wardrobe, or Bilbo Baggins first tasting adventure. Before I could write well, my mom kept a daily diary of my “good things,” and on September 8, 2005, the very best thing was practicing Latin flashcards with my sister.

We actually starting learning Latin in Grammar school, the next hallway, where a few more graduates joined the mix. We were learning how to form good paragraphs by then, and while we knew how to write letters, putting them in the right order was still a little difficult. That’s why you see a lot of Spelling Tests on the Grammar hall. I remember practicing spelling every day so I could get a 100 on the Thursday test and not take the Friday test. It was a Thursday on October 22, 2009, and it might have been one of those days that I didn’t get a 100 because my diary reads, “Today was weird. Some of it was good, most of it was bad.” That apparently sums up my angst at age 9.

But the angst had only just begun. The Logic school hallway isn’t particularly pleasant. They have to hang the assignments up high, or else they will get completely destroyed, along with some short 6th graders, the next time the bell rings. We were trying to form arguments and think logically, to write paragraphs that actually meant something. True rebels distinguished themselves by putting their feet up on the chair in front of them or even borrowing pens in Mrs. Kennedy’s class. Middle school is always a confusing time, and particularly for us, because we couldn’t find Chris Kalevas. But one light in the storm was Mr. Fuenzalida’s 20 extra credit points for drawing the Miami U on our tests. To me, nothing sums up middle school better than Seth Holloway wearing a Mr. Fuenzalida Be Logical shirt while doing the ALS ice-bucket challenge.

Which brings me to the Rhetoric Hall. I don’t know about you, but to me, over the past four years, the high school hall has come to feel like home. I made a Greek movie on that hall. I decorated that hall and made friends on that hall. There may not be assignments hanging on the walls, but you can go hear a thesis in the auditorium, that was most likely advised by Mrs. McDonald. You can see the college pennants on Mrs. Smith’s door, except for mine because I never got around to making one. (Sorry, Mrs. Smith.) That’s what Rhetoric school is about. We made it, and that’s where the tour ends.

But there’s more than that, isn’t there? There’s more than that because some time along the way, we stopped agonizing over forming letters and coloring in the lines and started agonizing over how to express ourselves, how to believe in God, and how to exist in this world. We’re not in Book 1 of school anymore. Somewhere along the way, we reached the part of the Harry Potter movies where you can visibly see the saturation get a little weird and ominous, and you realize the child actors aren’t children anymore. It’s the part where Chronicles of Narnia gets weirdly existential. It’s the part when your nice little adventure in the Shire becomes Frodo in a sea of lava, his finger bitten off, while Mount Doom crumbles around him. Or when he returns to the Shire, and it’s not the same anymore. It’s been corrupted.

It’s not the same because in third grade, my diary read, “Today was weird,” and by high school, I was writing, “Sometimes I doubt I can make true connections with other people.” I went on, “That comes from a place of mutual insincerity. No one admits that they are unhappy, but is anyone really happy? Our good feelings… are they just a false euphoria to mask the pain? We all feel the pain, don’t we? Then why do we pretend like people in pain are so foreign to us?” Growing up isn’t just struggling to write, spell, argue, and speak; it’s looking depravity right in the face for the first time, and trying to come to terms with it. It’s realizing that the worst depravity is right there within you. It’s realizing that you don’t really know who you are and clawing through webs of fear, insecurity, doubt, and pride to figure it out.

Growing up this way means facing the entirely self-interested children within us. It’s finally realizing, whether it’s instantaneous or gradual, what it means to look at others as actual human beings, not just blips on your own radar. It means gathering the courage to examine the self, without getting defensive, without lying, with vulnerability.

I saw them when my friends broke down in loneliness, realizing that those around them couldn’t fulfill their need for love, that even when they do everything right, it’s not always enough. I saw them in Costa Rica, when my classmates gained the courage to open up to each other and cry. The growing pains aren’t easy.

But the thing is that they’re worth it. Book 1’s are fun and exciting, but it’s the Book 7’s that make us cry. It’s the end of the journey that makes us feel something, that opens our eyes to truth and makes us like children all over again, facing a new world that we hadn’t even known existed. The handwriting sheets, spelling tests, and paragraphs were worth it because I am proud of my senior thesis. The angst, loneliness, and pain are worth it because I am proud of who I am in God, and who my classmates are.

Just as our handwriting sheets were tickets to spelling tests, our growing pains are tickets to the next thing. When we broke down in loneliness or shared our struggles in Costa Rica, we were being seen. And allowing ourselves to face the pain of vulnerability expands our capacity to love. It allows us to surround each other with strength. Years ago, I couldn’t have told you what love was because that entirely self-interested child didn’t know. I had to learn that love is selflessness, and paradoxically, only by surrendering to selflessness can we ever hope to know who we are.

This year, I have had the honor of investing in the lives of many seniors and younger students that I truly love. I want them to succeed, and I want them to find their way. As we became more comfortable with who we are and who God is, we became more thoughtful, kind, and discerning, and that’s our ticket. That’s where this tour of CCS ends.

Moving forward, we’ll go on to the next hallways. So in the midst of them, we must remember that these growing pains are what open our hearts and minds. Growing is hard, but it’s worth it. It’s our ticket to something greater, not a defeat. In a larger sense, we’re only just leaving the Phonics school. So as we start over again at Book 1, remember what it felt like to reach Book 7. Remember all the ups and downs in between and how it’s all leading up to final revelation, to our last graduation, where we meet God face to face.