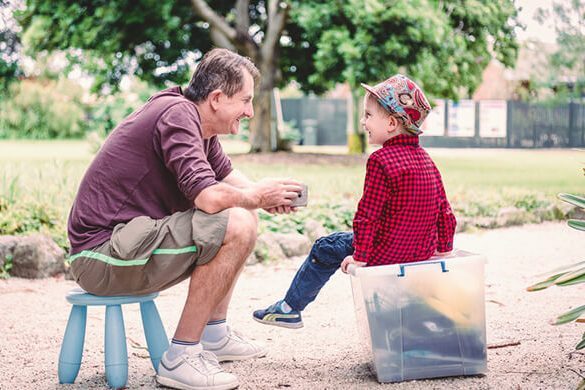 If you are anything like me, being a parent is probably the most humbling part of your life. As a young father, I remember disciplining my children primarily because of how I wanted to be perceived by other parents around me. I felt despair when my children would act out in public, particularly when my kid was the one biting all of the other toddlers in our weekly Small Group. On the other hand, I overflowed with pride when a parent would comment on my child’s good behavior. Let’s be honest: the latter was much less frequent. The difficult lesson I have learned is that both pride and despair are evidence of the reliance on my own works instead of God’s grace.

1. Help your children see their need for God
The law has no power to change the heart of my child. Romans 7 teaches that the law was given to expose sin and to crush us by the weight of trying to uphold it. When our children become aware of this burden, we have the wonderful opportunity to explain to them their need for a Savior and teach them of His grace and the heart-transforming power of the beautiful Gospel! This is a freeing concept, forcing us to surrender any ability that we may have to change their hearts. It brings our focus onto emulating the love and grace shown by Christ’s example.

2. Point them to God’s Provision
For years (and maybe to this day), I had the notion that my wild offspring would be these self-sanctifying, sinless, sweet little kids based on my expression of disbelief and astonishment every time their sinful nature would reveal itself. Fortunately, God is a much better Father than I am. For example, I love the picture of grace He gives us after man’s first sin. After disciplining them and explaining the consequences of their sin, God made animal skin clothes for Adam and Eve, which is a glorious illustration of His unconditional love. Just as important, God’s sacrifice of the animals to cover the sin and shame of man points to the eventual sacrifice of His Son to account for the sins of all mankind.

3. Model God’s grace
Lead your children using God as your example. Use rules and law just as God does in the Bible – to protect us and to expose sin. Shower your children in love and grace in order to reflect what Jesus did for each of us. Once this concept of grace takes root, our children begin to understand how they can love the world around them and point others to the Savior. Finally, when you see me at school looking shocked and dismayed and getting angry after my son launches a ball at one of my daughters, don’t judge. Like I said, God is a much better Father than I am.

If you missed our Fathers’ Fellowship event hosted by PTF, you can view a portion of the message that was shared by Dwayne Whiteheart, CCS Athletic Director.