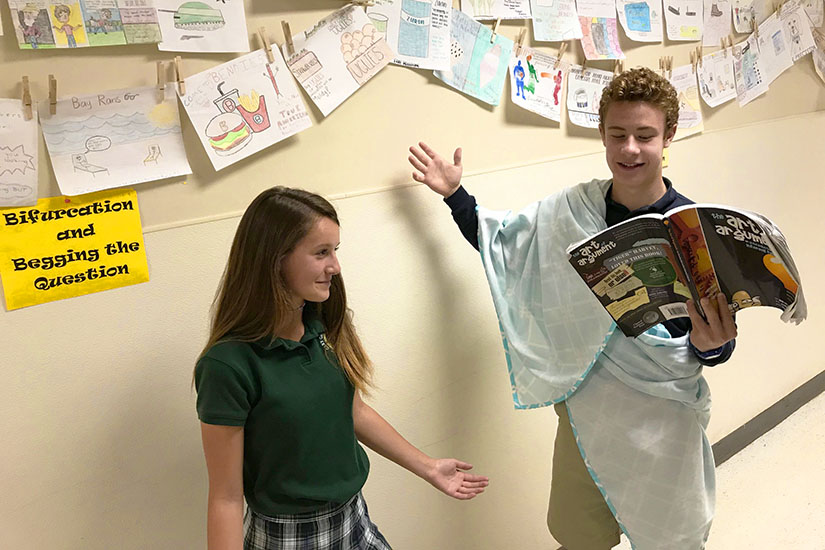 I teach logic to eighth graders. If ever there seemed to be a fallacious statement, wouldn’t that be it? But really, what better time to teach students how to argue well and effectively than when they are in the “Pert Stage”? If ever there is something fourteen-year-olds as a group can do well, it’s argue! (Whoops! There’s a sweeping generalization fallacy!)

We began the year discovering types of fallacies which middle schoolers and politicians use a lot: ad fontem arguments, which focus on the source of the argument rather than on the argument itself. Students enjoyed discerning between–and creating their own–examples of ad hominem abusive, ad hominem circumstantial, and genetic fallacies. Especially during football season, lots of circumstantial and genetic fallacy-creating filled the halls: “Of course XYC football team runs well; they’re a cow college and spend all their time chasing farm animals in the field!” and the like.

During political season, the students had studied enough fallacies and types of propaganda that they could effectively deconstruct political ads. With a partner, they chose and analyzed a political mailer for several types of propaganda and the clever ways the candidates used photos, colors, and fonts to get their points across. The most common fallacies and propaganda types included the ad hominem arguments, ad baculum (“appeal to fear”), appeal to illegitimate authority, mob appeal, and ad misericordiam (“appeal to pity”). They have become much more discerning in hearing and (dis)believing everything they hear and see in the media.

One of the most popular, and frequently used, fallacies eighth graders love to point out is the tu quoque, or “you, too” fallacy. This fallacy suggests that while, yes, what I did was wrong, what you have done is much worse! They love pointing out this fallacy to adults: “Yes, I came in fifteen minutes past curfew, but you told me you snuck out of your parents’ house every weekend when you were a teenager.” Be careful what you share! Political ads and television commercials actually pack a punch with tu quoque fallacies; they’re difficult to rebut without resorting to, “Because I told you so!”

Fourth quarter found us using many of the twenty-eight informal arguments we study in a two week mini-lesson on the 1925 Scopes trial in Tennessee. We studied several examples of primary sources from the trial and its surrounding “redneck carnival,” as the secular press called it (a prime example of the genetic fallacy). We discovered that both sides of the trial, the Christians and the secular, used many types of propaganda and fallacies to make their points. The most commonly discussed fallacious arguments centered on bifurcation (either/or arguments: no middle ground), generalizations, irrelevant thesis (arguments that distract by making a case for the wrong point), is-ought arguments (just because something is a certain way, it ought to continue that way), and ad hominem arguments. The students did an excellent job objectively recognizing and explaining the fallacious arguments.

So, teaching logic to eighth graders: what better time? What better place? Let’s use what they love to do to teach them how to effectively argue. And write persuasive papers. And debate. And, in a very few short years, write and present their senior thesis!