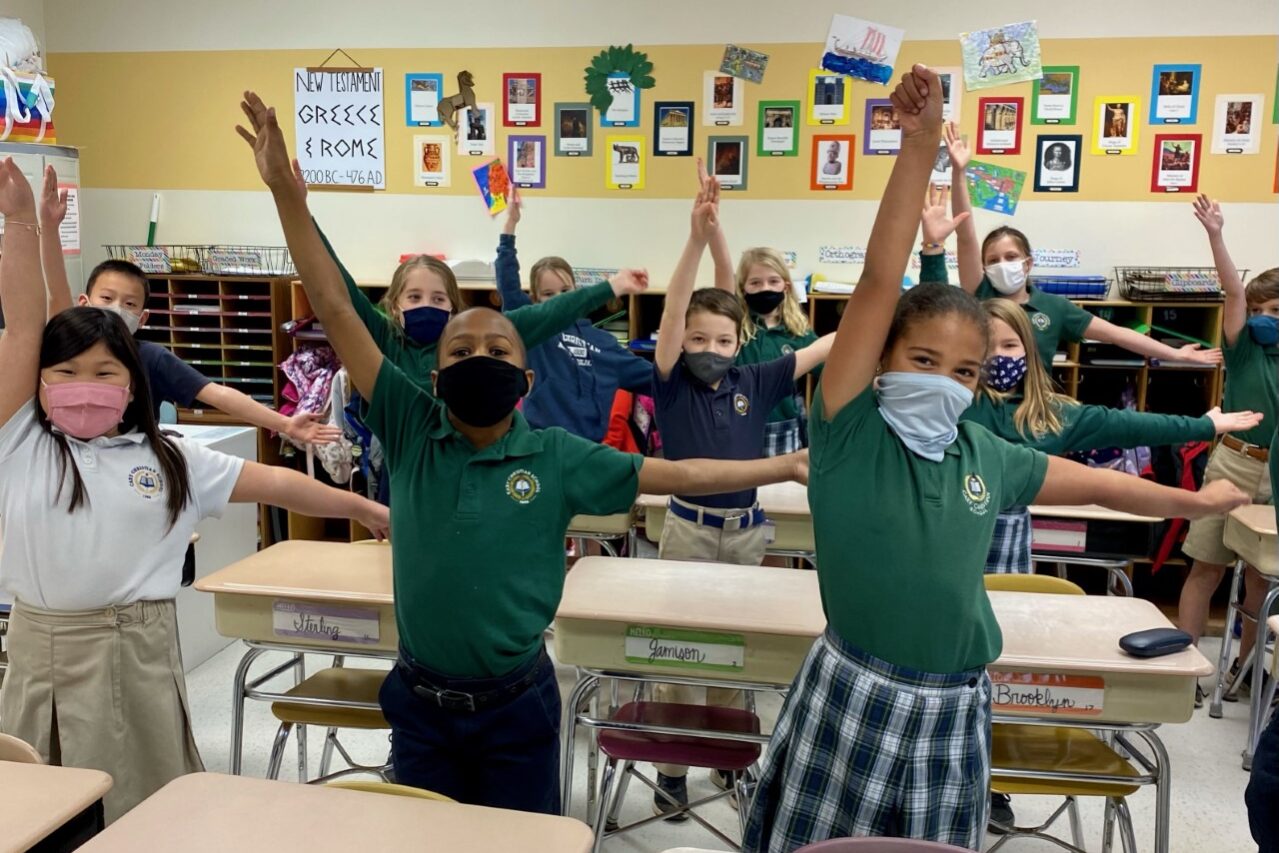 As the introverted-est of introverts, I never once answered the question of “What do you want to be when you grow up?” with anything that would require me to do anything in front of anyone. I wanted to be a mailman or a librarian. Furthermore, the last thing I ever imagined myself doing was singing in front of people, or heaven forbid, dancing. The thought of being seen or heard was enough to make me break into a full-on panic attack.

Fast forward to the present, and not only does my career require me to stand in front of (little) people every moment of the day, I also find myself singing (loudly and off-key) and dancing all day long. From our hymn each morning, to our Latin endings, our Grammar jingles, the books of the Bible, the fifty states and their capitals, the presidents of the United States, and the layers of the rainforest, barely an hour goes by that I don’t find myself leading my pupils in song.

At Cary Christian School, as part of a classical curriculum, we incorporate chants, jingles, and songs into every subject we teach in the phonics and grammar schools.

Repetitio mater memoriae just means “repetition is the mother of memory,” but everything sounds smarter in Latin. The idea is simple. The more we repeat the same information, the more deeply it will be ingrained in our brains, and the longer we will remember it. By singing songs and chanting chants, we are able to repeat the same facts over and over again without its feeling tedious, and thereby committing them to memory.

Classical education seeks to teach children to learn in the way they are naturally inclined to do so. In “The Lost Tools of Learning,” Dorothy Sayers points out that children learn differently during different stages of development. She identifies students in grammar school—the stage of the trivium which emphasizes memorization skills: training the brain to collect, organize, store, and retrieve information—as being in the “poll-parrot” stage of development. Students in this stage love singing silly songs and generally are not embarrassed to do so. They enjoy making up chants and saying fun, Seuss-esque words. They thrive on repetition and routine, and they love hands-on learning. This means the best way to teach younger students and their sponge-like brains is to put the important facts that we want them to remember to a catchy tune or a rhythmic chant. Add some hand motions, and it will stick forever.

This year, Cary Christian School’s focus is Cultivating Scholé. The concept is that “when we embrace the idea of scholé, we see that learning can be a fruitful and enjoyable activity rather than an obligation. At the heart of this concept, scholé is all about a love of learning.” Singing, marching, dancing, and laughing the day away while filling our minds with important truths is the epitome of scholé. In the grammar school, our students spend the day learning with pleasure without the burden of boredom.

There is no doubt that we were created to sing. The Scriptures are filled with verses instructing us to make music with our mouths. We are to sing for joy, sing when we are sad, sing to each other, and sing to ourselves.

Psalm 105:2 tells us to “Sing to him, sing praises to him; tell of all his wondrous works!” All creation and its fullness is the Lord’s, so whether we are singing about the hardness of rocks, the presidents of the United States, the judges of Israel, or the books of the Bible, we are joyfully telling of our Creator’s wonderous works.

Music is a powerful thing. I love C.S. Lewis’s imaginings of the act of creation in The Magician’s Nephew. It is through song that Aslan creates everything from the void, and as soon as creation is created, it too joins in the song:

Then two wonders happened at the same moment. One was that the voice was suddenly joined by other voices; more voices than you could possibly count. They were in harmony with the first voice, but far higher up the scale; cold, tingling, silvery voices. The second wonder was that the blackness overhead, all at once, was blazing with stars. They didn’t come out gently one by one as on a summer evening. One moment there had been nothing but darkness; next moment a thousand, thousand points of light leaped out . . . If you had seen and heard it, as Digory did, you would have felt quite certain that it was the First Voice, the deep one, which had made them appear and made them sing.

Thus, we sing. Music has the power to make us laugh, to make us cry, and to make us remember. While I no longer need a song to help me remember “There are seven days, there are seven days, there are seven days in a week” or “These are the months of the year! Yee-haw!”, I still rely on jingles to help me keep the presidents in order, to find Obadiah when the pastor tells me to turn there, to keep straight the genealogy of Christ, to remember the names of all the judges, to picture a map of the United States, to recall the dates of the Civil War, and to recite the Preamble to the Constitution. You might even see me in the grocery store, singing the Capacity Song and shaking my hips while trying to figure out how many pints of whipping cream I need for a cake recipe.