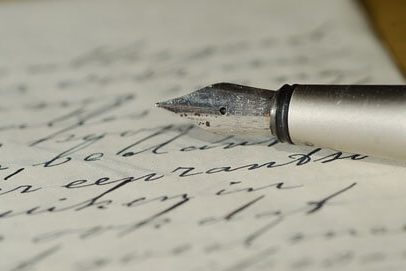 There’s an old saying that “the pen is mightier than the sword.”  Our present environment of texting, Siri, and keyboards may very well soon make this phrase an anachronism.  Who uses a pen anymore (or a sword, for that matter)?  As we move further down the path of ubiquitous electronic technology, the use of and the perceived need for penmanship or handwriting seems to grow ever smaller.

The controversial Common Core national education standards do not require the teaching of cursive handwriting to elementary students, only that kindergarteners and first-graders write legibly.  Ostensibly, this standard is part of the overarching goal of the Common Core to “prepare students to compete in a national and global economy.” (What this statement means, I confess, I honestly do not know.  The best I can surmise is, “We’re going to make your kid a really good cog in a really big machine.”)

Morgan Polikoff, an assistant professor of education at the University of Southern California, argued in an online debate about cursive handwriting in The New York Times that, “Very small proportions of adults use cursive for their day-to-day writing. Much of our communication is done on a keyboard, and the rest is done with print,” therefore, he concludes, “Cursive should be allowed to die.”

This is a fairly shortsighted perspective.  Leaving aside the fact that his conclusion is a non sequitur (a logical fallacy that our 8th graders are learning to recognize), Dr. Polikoff is arguing from the false assumption that the point of learning cursive handwriting (or anything, for that matter) is fundamentally related to whether one will overtly use the skill in some future day-to-day life.  Is that all education is about?

Mr. Klemm writes: “Yet scientists are discovering that learning cursive is an important tool for cognitive development, particularly in training the brain to learn ‘functional specialization,’ that is, the capacity for optimal efficiency. In the case of learning cursive writing, the brain develops functional specialization that integrates … sensation, movement control and thinking. Brain imaging studies reveal that multiple areas of (the) brain become co-activated during the learning of cursive writing of pseudo-letters, as opposed to typing or just visual practice.”

When writing in cursive, students must pay attention to and think about what and how they are writing, which helps their thinking skills and develops good motor control over their fingers, so they can write legibly.

Learning cursive also helps students learn to read. “The distinction that children make in writing the letters in cursive carries over to the reading process,” writes Sam Blumenfeld, an author of several books on pedagogy and a columnist for Practical Homeschooling Magazine. “In writing print script, the letters may be all over the page, sometimes written from left to right and from right to left. In cursive, where all of the letters connect, the child learns directional discipline. This helps in learning to spell, for how the letters join with one another creates habits of hand movement that automatically aid the spelling process.”

Learning cursive also boosts students’ ability to memorize and generate ideas. “When we write, a unique neural circuit is automatically activated,” Stanislas Dehaene, a psychologist at the Collège de France in Paris, told The New York Times. “There is a core recognition of the gesture in the written word, a sort of recognition by mental simulation in your brain. And it seems that this circuit is contributing in unique ways we didn’t realize. Learning is made easier.”

Penmanship also plays a profound role in educating us at a deeper level.  Forming letters onto a page that create words that make sentences that form paragraphs that express thought is one of the most uniquely human things that we do.  Striking a key, in the end, is more like a cog making a movement within the context of the greater machine.  Writing a letter is more like an image bearer of the living God speaking from himself to another person, another soul.  When we write, we create.  Hand touches tool which touches page and an incarnate artifact is produced.

We are not makers of widgets, we are cultivators of souls.  The art of penmanship is part of that cultivation.

Nota Bene: The irony that I “penned” this article using a keyboard is not lost on me.  I am not a Luddite who eschews all technology, and I recognize the usefulness of this medium to transmit ideas on a mass scale quickly and efficiently.  I am simply arguing that we need not throw the baby out with the bath water.